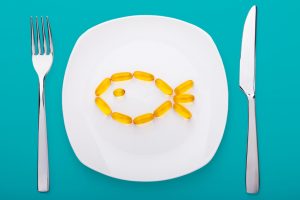 A condition characterized by central obesity, hypertension, and adverse glucose and insulin metabolism, Metabolic Syndrome also adversely affects cardiovascular health. Dimitris Tousoulis, from the University of Athens (Greece), and colleagues enrolled 29 men and women with Metabolic Syndrome, to receive either an omega-3 dietary supplement (2 g, as 46% EPA and 38% DHA) or placebo, for 12 weeks; followed by a 4-week ‘washout’ (no intervention) and crossover to the other intervention. The team observed that flow mediated dilation – a measure of blood flow and vascular health – and pulse wave velocity – a measure of arterial stiffness, improved during the omega-3 supplemented periods of the study, as compared to placebo. As well, levels of IL-6, an inflammatory compound, decreased significantly during the omega-3 period. The study authors submit that: “In subjects with [Metabolic Syndrome], treatment with omega-3 [fatty acids] improved endothelial function and arterial stiffness with a parallel antiinflammatory effect.”

TEDBits (Dr. Ted says): “If you wish to improve arterial stiffness, omega 3s are now a mainstay in supplementation. Some substances, like punicalagins from pomegranate, are currently being studied to reverse atherosclerosis.”